The Bonnaroo Music and Arts Festival, the largest outdoor festival in North America, took place this year from June 7th-10th in Manchester, TN. With headliners such as Muse, Eminem and The Killers, it’s no surprise the festival attracted over 50,000 attendees this year.

More than 10 stages hosted a diverse lineup of 120+ artists and bands. Bonnaroovians could also enjoy yoga classes, all night dance parties, comedy shows, late night karaoke and many other activities located within Centeroo, the heart of the Bonnaroo event space.

Since it is one of the most attended and unique music festivals in the U.S, we wanted to take a look at this year’s attendees and see what location data reveals about foot traffic trends during the festival. The data can help festival planners plan more efficiently for future festivals.

Where They Visited From and Stayed

This four day festival brought people from all across the country to come together for music, arts and an unforgettable experience. By homing anonymous devices to census block groups, we can see where those devices come from.

Perhaps unsurprisingly, we found that most people traveled from within Tennessee to attend. Florida was the second most traveled from state and many people also came from California, New York, and states surrounding Tennessee. We noticed that the New England and North Western regions were noticeably under represented at The Farm this year. 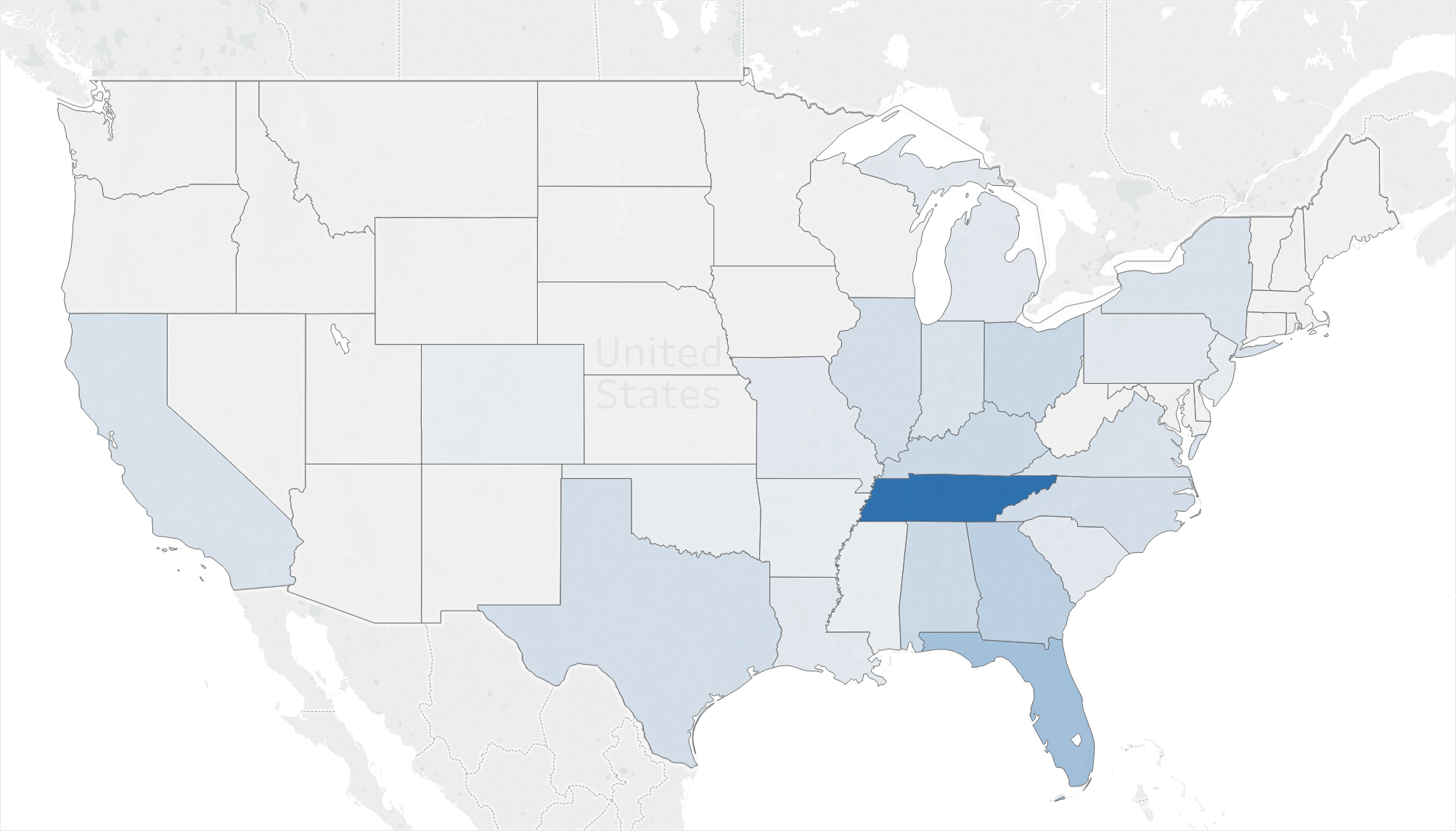 Most Bonnaroovians camped or glamped out in temperatures in the mid-nineties to make the most of their time at Bonnaroo. Those who opted out of camping stayed at budget friendly hotels nearby, such as Microtel Inn & Suites by Wyndham, Holiday Inn Express Hotel Manchester and America’s Best Value Inn.

Most Popular Day and Performances

By mapping out and creating polygons of the stages at Bonnaroo, we were able to analyze the foot traffic trends at each stage to determine what stage and time was the busiest or quietest: 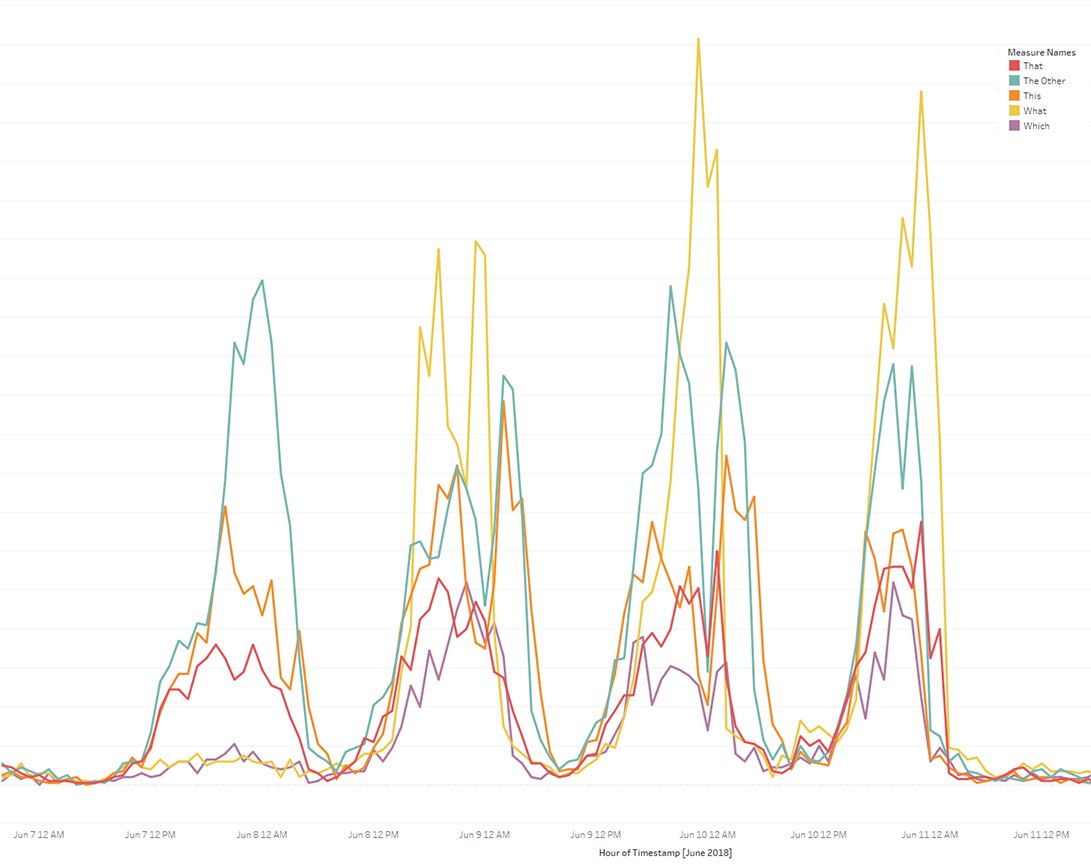 Each color represents foot traffic trends at a stage

Our analysis showed that Paramore, who made their first ever appearance at Bonnaroo this year, tied with headliner Muse for the most popular performance on Friday. On Saturday, Eminem’s performance on the What Stage was the most attended performance of the whole festival. The Killers were a close second for overall foot traffic when they closed out Sunday night. Other artists that were very popular were Dua Lipa, alt-J and Future, who all performed on Sunday, which helped make it the most attended day of the festival.

With so many attendees guaranteed every year, Bonnaroo attracts many big name sponsors and partners like PayPal, Bacardi, State Farm and Asics, just to name a few. An important factor for these brands when considering whether or not to sponsor the festival is whether or not the demographics of the people who attend aligns with their target group of consumers.

We took a look at the demographic breakdown of this year’s attendees compared to both the average American and the average person in Tennessee to get a better idea of who typical Bonnaroo attendees are. By analyzing anonymous device location signals and cross referencing them with census block groups, we pulled together the following breakout: 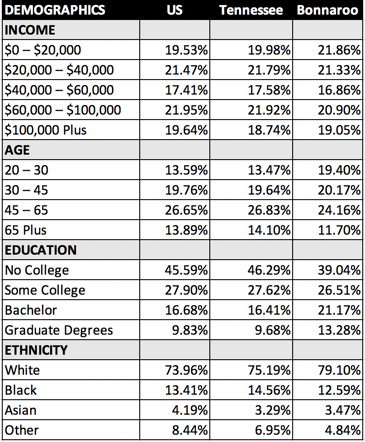 We found that the income ranges of Bonnaroo attendees represented similar demographics to those of both the average American and the average person in Tennessee. There was a higher percentage of people in the $0-20,000 range though compared to those other two groups, which isn’t necessarily surprising given the high percentage of attendees who were between 20 and 30 years old.

Location data and foot traffic analysis reveal many unique insights about a specific event or venue. At an event as large at Bonnaroo, the data tells an interesting story about who attended the festival and what they did while they were there. Festival planners and sponsors can also benefit from this information and use it to create better fan experiences, like partnering up with hotels or selecting sponsors whose target market aligns with the attendee demographics.

Want to learn more about foot traffic analysis? Download the whitepaper below: