A smart city is an urban area that incorporates information and communication technologies to improve the quality of city life. The goal of these enhancements is to strengthen the quality and performance of services such as energy, transportation and utilities in order to reduce resource consumption, waste and overall costs. All around the world smart cities are popping up, and we have found 22 for you to visit in 2020! 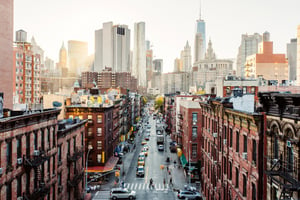 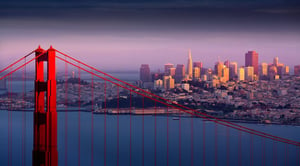 San Francisco is the innovation hub of the world. After receiving $11 million of funding from the U.S. Department of Transportation, the city is making an active effort to help keep the city safe and remove congestion through providing effective transportation routes. Through this process, they implemented smart signal traffic lights to respond and learn from cars idling at lights, built new high occupancy lanes for carpooling, and even dedicated curb space for pick up’s/ drop off’s by carpools. Read about the city’s other changes here.
3. Buenos Aires, Argentina 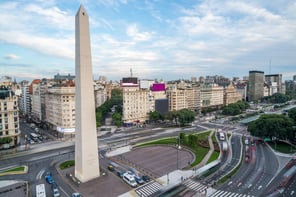 The government of the city of Buenos Aires chose to partner with Philips to renew the street lighting system with LED technology. Philips is the global leader in lighting and was chosen from a public bidding process. With Philips LED lighting it helped to reduce the CO2 cost and enabled over 50% of energy savings for the city. Further, these high tech lightbulbs are connected to a lighting management software to continue to reduce usage. 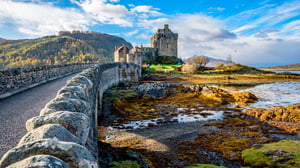 4. Edinburgh, Scotland Edinburgh is aiming to reduce noise pollution throughout the city by leveraging IoT technology. Edinburgh aims to understand community input of levels of noise acceptability by developing a tool to predict noise around the city and plan accordingly based on sensor results.
5. Singapore, Singapore 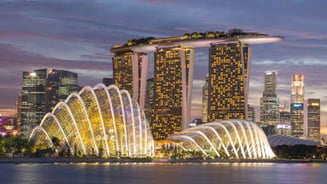 Singapore, named the smart city of 2018, is an indisputable leader when it comes to smart integration into services around the city. Singapore has implemented a variety of smart technologies, with a specific focus on improving traffic over the past few years. They have concentrated on reducing the number of cars on the roads by implementing connected traffic solutions, including their first electric car sharing program.

Chicago’s motivation for connected technologies was driven by a lack of parking options. Cars continuously searching for a parking spot leads to congestion - and frustrated drivers. Chicago partnered with ParqEx, which connects individuals who are searching fora place to park with available spots. This makes travel by car much more convenient for driving travelers!
7. Rio de Janeiro, Brazil 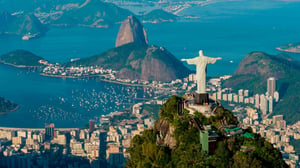 Rio partnered with IBM to improve their emergency response system back in 2010 after a fatal landslide. Sensors were placed in various locations to alert officials in the Rio operations Center if a natural disaster is about to occur. Additionally, the center is starting to focus more on traffic movements and the public transportation systems. The goal is to increase the number of power efficient routes.
8. Boston, Massachusetts

Home of the Red Sox (and Skyhook)! As a city with a high population of students and tech companies, this city is full of innovation. Popular streets with busy intersections, like Massachusetts Avenue and Beacon Street, that run through several neighborhoods of Boston use sensors and cameras to ensure pedestrian safety and identifying ways to prevent car accidents. Boston also uses a public bike share system, smart parking, and are developing self-driving cars.
9. Berlin, Germany 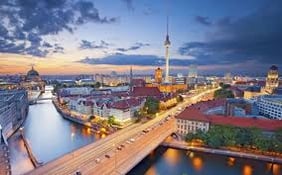 As of 2016, more than 6% of German homeowners are smart homeowners. This includes smart meters, which control electric usages, sensors, smart televisions, smart thermostats, and smart appliances. In the future, Panasonic will start to fund the latest smart home technology for inhabitants. There are plenty of exciting times ahead for the citizens of Berlin! 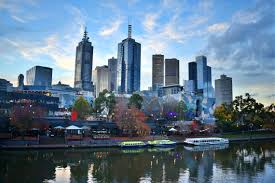 This city has a need for speed. In October of 2017, Melbourne announced it has a perfect 4G connectivity score making downloading easier than ever before. Additionally, similar to Chicago, Melbourne was noticing an increase of congestion on the roads and placed sensors on parking meters to monitor and identify open parking spots.
11. Copenhagen, Denmark
Copenhagen was ahead of other cities in terms of funding and implementation of smart devices. In 2014, they invested over 30 million euros in new street lights and more than 13 million euros in traffic lights and traffic management.
12. Montreal, Canada 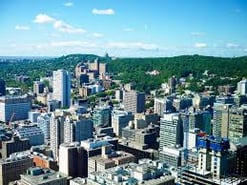 In 2019, Montreal won $50 million from the government in the smart cities challenge. They will be starting to implement technology to improve the lives of their citizens. Make sure to take a trip here in the next couple of years to see how the city is changing!
13. Moscow, Russia 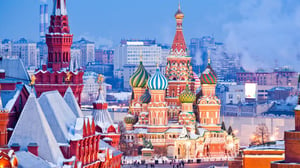 Safety and smart technology go hand and hand for this city. All around Moscow, cameras with facial recognition capabilities have been implemented. These cameras are now being used to help solve 70% of all crimes. Moscow plans to continue rolling out more cameras and technology later this year.
14. Manchester, England

In 2016, Manchester kicked off their Cityverve project to implement IoT technology to help with healthcare, transportation, energy and environment, city culture and community. Manchester started with their lighthouse efficiency project to improve energy efficiency on their university campuses and civic estates.
15. Atlanta, Georgia 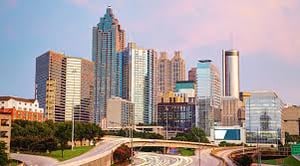 Red light! Green light! This city has implemented smart traffic lights to base timing on real life occurrences rather than on a timer. The Director of IoT ecosystems for the city of Atlanta, Cynthia Curry, says the city has already seen a 25% reduction of traffic over the past 6 months. Additionally, they have started a smart recycling and trash system by implementing sensors into the bins to help with route optimization!
16. Paris, France 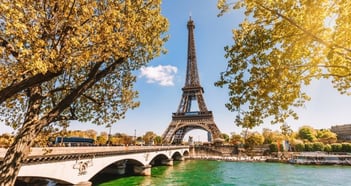 To encourage the use of public transportation, this city provides a subscription-based bike system and initiatives for electric vehicles. But, this romantic city is implementing technology to deliver more efficient public services for Parisians. For example, they are placing sensors in municipal swimming pools to understand how frequently they are being used. This will allow Paris city officials adjust infrastructure budgets, manage water and heating costs, and send updates to citizens of how busy the pool is.
17. Reykjavik, Iceland

Reykjavik is using smart city initiatives to better its environment. To encourage the use of public transportation

in a surrounding city of Reykjavik, the city created a public transportation app to continuously update citizens on bus times or traffic. The city has found that this has been successful and helpful since its implementation.
18. Amsterdam, Netherlands 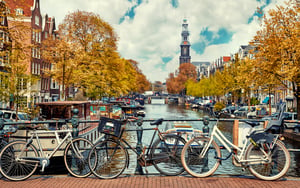 A connected city is a smart city. This Dutch capitol created app for individuals to download and will tell them activities around them based off their location and interests. This allows for users to cut down on wasted time searching for something to do and see the events happening in their city.
19. Barcelona, Spain

This historic city was the fifth smart city in Europe and the first in Spain. Besides having an excellent bike sharing program, efficient bus transit system, connected parking apps, and sensors for waste management, it also uses renewable energy solutions. Solar panels have been placed around the city to collect solar energy, which is then used to power homes and businesses around Barcelona. IoT assists solar panels by giving real time updates to technology centers on the energy output levels, or updates on the environment. It is important that these solar panels are adjusted properly to changes in the environment to ensure to maximize grid usage.

20. Dublin, Ireland
Dublin has been an early initiator of smart cities, and has implemented tras 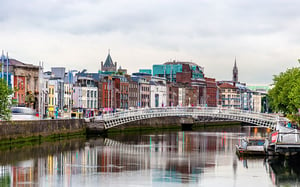 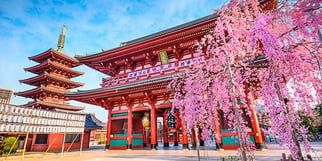 As the host of the 20
20 Olympics Games, Tokyo is set to use smart facial recognition technology to increase security. Over 300,000 athletes and staff are expected to submit photographs to the data base beforethe start of the Olympics.  Additionally, Tokyo tested driverless taxis in 2018 and are expecting the technology to be ready to transport athletes and tourist from sport venues to the city. Passengers will be able to pay their fare and unlock the car doors from an app on their smartphone.
22. Seoul, Korea 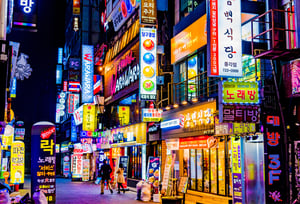 Over 50,000 IoT sensors are to be implemented through this capitol city by 2020 to collect data on dust, traffic, light intensity, foot and vehicle traffic patterns in order to improve the quality of citizens lives. Additionally, citizens will be able to identify available parking spots off a mobile app but users will be able to pay fees and make reservations on specific spots. Seoul is planning on making 3,000 parking spots available by 2022.
Smart cities are everywhere! The smart city market is estimated to be worth over 2 trillion by 2025. Skyhook has been in the IoT industry for more than 15 years and is constantly exploring how IoT is improving the world around us. To see some examples of how Skyhook supports IoT devices, download our white paper.