The 2017 World Series was a rollercoaster of a series. The Los Angeles Dodgers and Houston Astros both played phenomenal baseball, but the Astros came out on top in Game 7 to claim the title and beat the Dodgers four games to three.

We analyzed the foot traffic of the two teams’ fan bases at Games 2 and 3 to see if there are similar loyalties, behaviors and brand preferences across both groups. We wanted to find out, “What makes these two fan bases unique? Where do fan interests overlap between the two groups and what do their shopping habits and store visits say about their lifestyles?”

In this case, we gathered all of the device IDs belonging to Astros and Dodgers-assigned geographies to create “fanscapes” and ran these respective groups through our Skyhook Personas. Skyhook Personas are built by calculating how millions of mobile phones and other devices interact with millions of commercial places of business every day. This process calculates fan brand affinities based on where the devices have visited stores and other commercial businesses.

Here’s what we found:

Both fan bases are avid QSR diners and like to eat at Wendy’s, McDonald's, Pizza Hut and Jack in the Box. We saw that when they went out to eat, Dodgers fans prefer Chipotle, KFC, Subway and Panda Express, while Astros prefer Chick-fil-a. Additionally, Dodgers fans are more likely to visit a coffee shop compared to Astros fans and are 18% more likely to stop at Starbucks specifically to get their fix.

Both teams’ showed interesting car-buying trends. Dodgers fans are much more likely to own a car and twice as likely to visit Honda and Toyota dealerships than Astros fans. 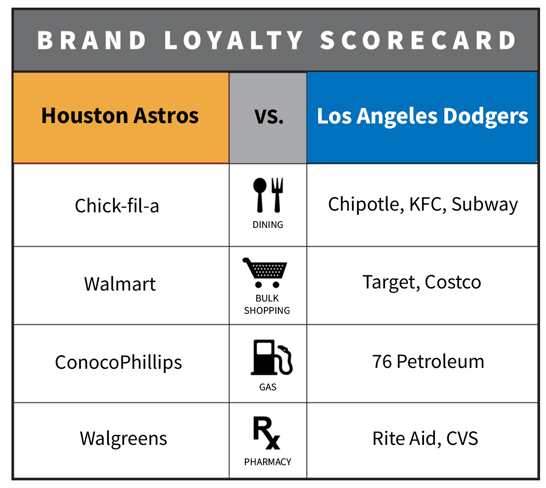 Fans came from across the country to watch the games at both stadiums. Unsurprisingly, most fans are from California and Texas. The largest portion of out-of-state fans came from Nevada, Florida, Louisiana and New York.

When it comes to loyalty, almost 4x more Dodgers fans traveled out of state for a game at the opposing team’s stadium than Astros fans.

Seeing where fans go and what they do is one way of understanding their brand and lifestyle preferences. Given our analysis, there’s a clear line in terms of which brands are favorable to Astros and Dodgers fans.

While venue foot traffic analysis is important in understanding consumer behaviors, fueling your campaigns with in-depth customer insights from the start can yield even better results.