Every week, a new smartwatch receives funding on Kickstarter or emerges from a Fortune 100 tech manufacturer or an Ivy League dropout in a garage in Southern California. The smartwatch market is expected to grow from 15 million devices to 373 million devices by 2020, NextMarket Insights predicts. With so much competition in the market, from small startups to tech giants, the toughest challenge smartwatch manufacturers face is standing out from the rest.

The tech giants like Sony, Samsung and Qualcommm are vying for market share against each other and the Kickstarter-funded wearable devices that have proven to be true competitors. The battle is shaping up to look like David vs. Goliath for many of these wearable companies.

Here are four Kickstarter-funded wearable devices that have proven they stand a chance against the big enterprise companies.

Omate TrueSmart is a true competitor to tech giants like the Qualcomm Toq Smartwatch. Despite the small size of their company and their new entry into the marketplace, they are a generation ahead when it comes to design, functionality, and form factor.

The TrueSmart is more than an accessory to a user’s smartphone. It has the functionality to operate as a standalone device and replace the smartphone entirely or operate as a companion device, supporting 3G SIM and Wi-Fi. All mobile phones and tablets are compatible with the TrueSmart, and the platform enables users to have full access to thousands of apps.

TrueSmart also has Wi-Fi, and you can use it as a mobile hotspot and tether for all Wi-Fi devices including laptops, Linux, and projects like Raspberry Pi and Arduino. 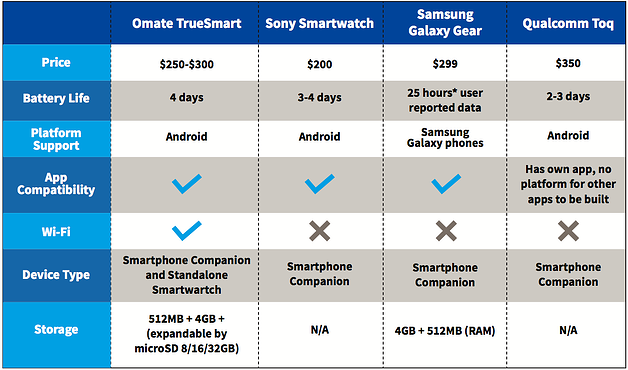 Neptune, a small Quebec startup founded by an 18 year old, is competing with the major players in the wearable industry with its Pine smartwatch. Many of the bigger tech giants have created smartwatches to serve as a companion to the phone, but the Neptune Pine is a standalone smartwatch that does not have to pair to a smartphone for full functionality. The device can deliver everything a smartphone can deliver, directly to someone’s wrist, eliminating the disruptive behavior of pulling a device out of their pockets.

The Neptune Pine packs a lot of connectivity beyond Bluetooth into its 66-by-53.5-by-14.2 mm body: Wi-Fi, GPS, and cellular networks. It’s equipped with everything a standard Android device needs, so it’s compatible with many Android apps that rely on native location features. True differentiation in the market helped the Neptune Pine reach eight times its Kickstarter crowdfunding goal. The fluid and frictionless functionality of the Neptune Pine smartwatch could upset the major players in the wearable space, who will be scrambling to catch up. 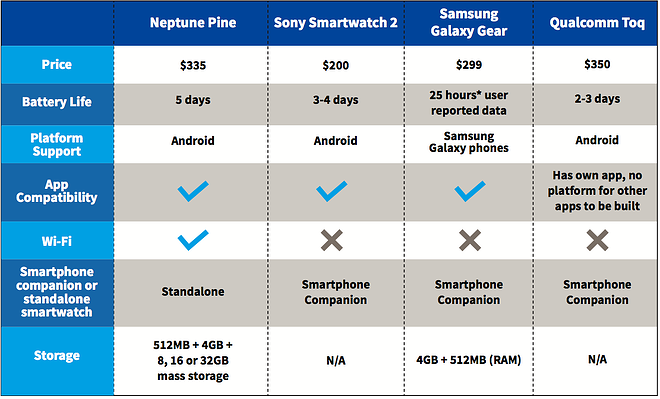 The MetaWatch is another Kickstarter project that has proven itself to be a worthy competitor against larger companies like Sony. With a battery life of five to seven days and platform support for both iOS and Android, MetaWatch has an advantage over Sony.

This smartwatch has as much focus on design and aesthetics as it does on functionality. The design of the new Meta model is a direct response to the criticism many have with the look and feel of smartwatches, thinking of them as too much technology and plastic for your wrist. The MetaWatch features premium metals, leather wristbands, and quality craftsmanship. The Meta has a new display with a higher-resolution e-paper screen similar to the Pebble. Not only does this new display look better, but it saves battery and makes the watch screen easier to read in bright environments. 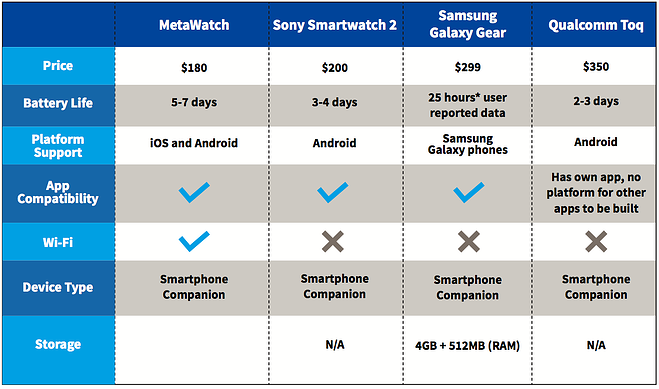 The Pebble smartwatch launched through Kickstarter and immediately became one of the most successful and well-known wearables in the industry. It’s also holds the record for the biggest Kickstarter ever, with 68,929 backers and $10,266,845 pledged. The Pebble set a standard for features and holds great mindshare in the industry, taking on big tech giants like Samsung.

Pebble’s platform pairs with both iOS and Android devices; Samsung’s Gear just supports its Galaxy phones. Pebble competes with equal if not greater battery power than many of the big tech companies, using power-saving epaper rather than a conventional LCD display. This battery-conscious approach enables the Pebble’s battery to last for a whole week; Samsung’s battery dies after 25 hours.

On top of being battery conscious and announcing its new app store at the International CES, the Pebble’s new Steel model comes in a new Brushed Stainless or Black Matte version that is sleeker than previous versions. The new Steel has a tough Corning Gorilla Glass display and an LED to indicate the charging status. On top of incredible features, Pebble manufacturers have created a smartwatch that looks great and that users will want to wear, unlike some of the bulkier smartwatches we have seen from Pebble competitors. Apps that will soon be part of Pebble’s platform are Pandora, GoPro, Yelp, and ESPN.

The Samsung Galaxy Gear has an advantage over the Pebble Smartwatch in regard to storage space, with Samsung’s 4GB versus Pebble’s 2MB. 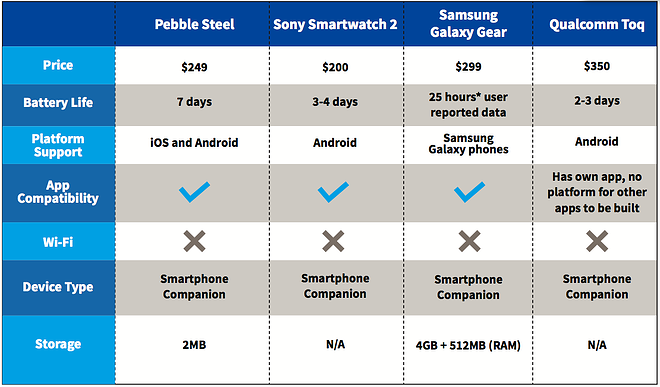 Tech giants will undoubtedly own significant market share because they already have compatible tech in the marketplace. Some wearable tech startups will fall behind the competition and go under despite reaching a crowdfunding goal.

Other startups will be so much of a threat to the tech giants that they will be heavily sought as acquisition targets. The winners will make products that people want to wear and can’t live without, like today’s smartphones. The functionality of these wearables will include many of the standout features that make the Pebble, MetaWatch, Neptune Pine, and Omate TrueSmart such worthy competitors: the capability to function separate from a smartphone, the compatibility with apps, the use of Wi-Fi and location, and a battery-conscious design.