Black Friday 2017 has come and gone and although predictions pointed to this year being all about digital sales, some brick and mortar stores ended up thriving and people still line up to get the best deals available.

We challenge the notion that retail as we know it is dead and wanted to see how busy certain brick and mortar retail chains would be during the busiest shopping week of the year. We conducted a foot traffic analysis and compared Thanksgiving and Black Friday foot traffic (November 23rd and 24th) to the week prior (November 16th 17th).

We tapped into our database of 4,550 Walmart stores, 1,840 target stores, 860 Macy’s stores, 1,152 Kohl's stores, 1,020 Best Buy stores and 685 Sears stores nationwide to analyze how many devices visited each chain during those periods of time. We decided on this set of chains because they are competitors of Amazon.

In order to pull together this analysis, we analyze the millions of mobile location signals we process daily and cross reference them with our database of POI (point of interest) venues in the US. When we see that a mobile device is positioned within the specific geometry of a predefined venue (in this case, a Best Buy, Walmart, Target, Kohls, Sears or Macy’s store across the US), then we classify that device as having visited the store location. 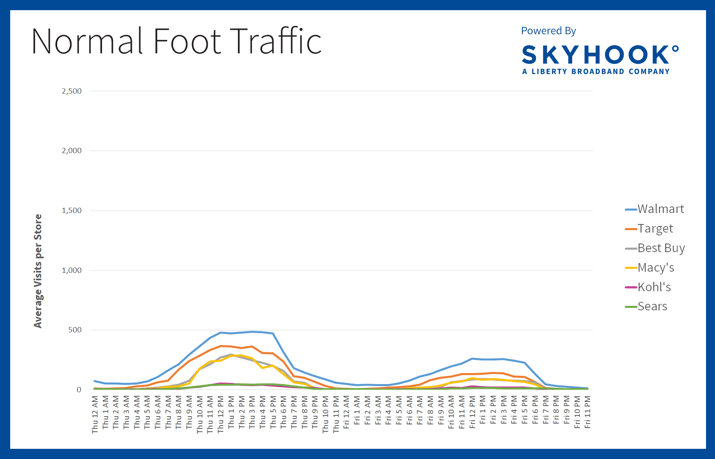 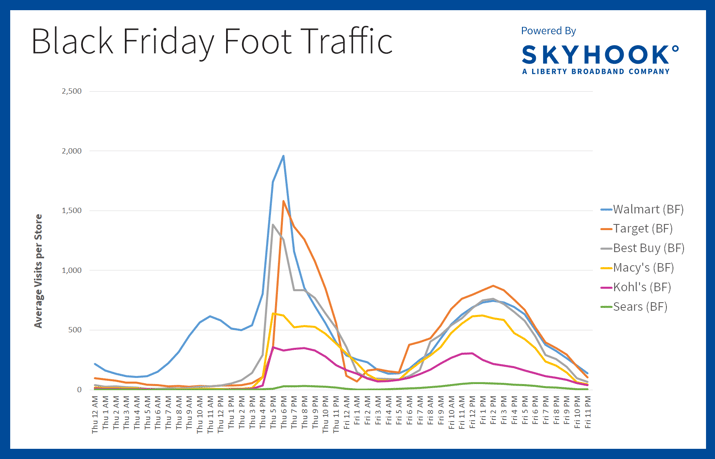 We saw an uptick in foot traffic around 4pm on Thanksgiving across all of the chains. That timeframe was right before most of the stores opened this year, compared to opening at midnight in previous years. Most stores peaked around 5pm and 6pm, which is exactly when they opened. Even though they participated in Black Friday deals, Macy’s, Sears and Kohl’s didn't get nearly as many visits as Walmart, Target and Best Buy.

Shoppers were apparently in a food coma from Thanksgiving and waited until around noon or later to do their shopping this year. While there were still more visits on Black Friday than during the previous Friday, there were significantly less visits to Walmart, Target and Best Buy on Black Friday than there were on Thanksgiving. Interestingly, Macy’s, Kohls and Sears all saw around the same number of visits during both days of the holiday week and more than the both days the week prior.

Overall, there was significantly more visits at these brick and mortar stores on Thanksgiving and Black Friday than the previous week. A lot of shoppers wanted to get the most out of the sales and lined up outside prior to store openings on Thanksgiving. Overall visits peaked as the stores were opening that evening as opposed to on Black Friday as some may have expected. Even though online sales may appear to be the holy grail for shoppers, retail certainly isn't dead and shoppers still like to shop in-store to get the best bang for their buck.