Steve Wozniak Does Things for the Right Reasons, AppsWorld 2014 Keynote

This morning I was 3 feet from greatness. Steve Wozniak, a long-time idol of mine stopped right in front of me on his way to be mic’d for this morning’s keynote fireside chat at AppsWorld at Moscone Center in San Francisco. Not only is he a genius, he’s a unique figure in the world of technology from the way he thinks to his physical makeup. He got up on the stage and in a voice lacking any pretense he talked about innovation. 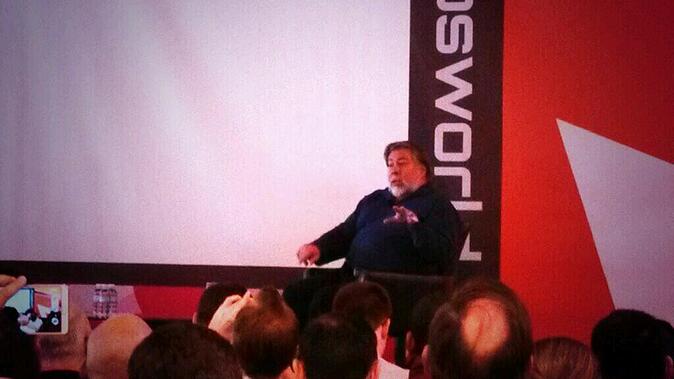 Woz on Doing Things For the Right Reasons

“I don’t have a definition for Innovation” said Woz. He later made a few statements that seemed to indicate that he would know innovation when he sees it happen. Woz isn’t motivated by innovating, he indicated that an engineer is motivated by personal interests and achievements and doing things for "the right reasons”. For Woz, that meant getting the first Apple floppy disk drive ready for the 1978 Consumer Electronics Show (CES) because it was important to the future of the company, but also because he had never been to Vegas and the drive was his ticket to "seeing the pretty lights”.

Woz wants things for the right reasons. He has all 3 phones in all 3 colors so he can tell them apart. One is an AT&T iPhone which he has because he has a grandfathered unlimited AT&T data plan. He also has a Verizon phone for the areas AT&T doesn’t cover and a phone he uses for International coverage. To Woz, those are the right reasons.

When asked if Apple is on the right track, he said "I'm a little worried, but I'm not  aware of the secret innovations." He called the really good ones (like the iPod, iPhone, Mac) the "lucky ones". He talked about the difference between innovation and features and said that Microsoft claimed to be the innovation company for decades, but Woz said he never saw anything like what Apple did. He was also willing to give CEO Tim Cook a few years before judging his performance, quipping that big companies take a long time to change.

"I've never been an artist or designer but we had a co-founder who insisted the look and feel was extremely important." Steve Jobs took this to heart and oversaw the “style” since he didn’t have what Woz called “real engineering ability”. Wozniak wanted everything to work, "Steve didn’t want anything cluttered” - but Wozniak was more interested in solving the puzzle and having the thing than the design that goes into making it useful. He’s one of those people who is willing to carry 3 phones because that’s what you need to be able to do the thing you want. This is why he and Jobs made a good, balanced team.

Woz on his AI Fascination

Woz’s favorite app is Siri. He’s fascinated with voice recognition and is fascinated with making AI understand what we actually mean. “I want it to know when I say '5 I mean 6, that I mean 6’” said Woz, but he fears we may have reached the limits of normal silicon technology due to Moore’s Law being maxed and the fact that computer chips can’t yet reason.

If we don't understand the brain, how do we make a conscious computer? Computers can't solve problems without a person giving it a method. Woz thinks we can’t get to where we need to go, but some of the audience noted that we’re trying to meld biotech and tech to perhaps allow us to build even smaller chips and augment actual brain activity.

"I'm a no privacy guy but I feel like everyone should have the privacy they think they do.” he said. "We gave up privacy 10 years ago.” Coincidentally, that's also the year that Facebook was born. "The internet was an escape from the world at the beginning and now it's the thing they use to control us.”

Woz on the Internet of Things Woz sees IoT becoming more prevalent, noting that the phone will still be the central controller for wearables and the connected home. “(The idea is that) We can address everything from our phones.” he said. "There's only a few companies that allow you to interrogate (the appliances and objects like pencils)...All these appliances should have a standard language that lets them talk to each other.” He noted that a standard language like Apple Script would be ideal because it’s an organic language that allows developers to define behaviors. "Nobody is talking about languages that allow objects to expose the way they talk to each other and we need that” he said adding that it would allow objects to interface across platforms regardless of who made them and would foster a totally connected home or work environment.

I have a simple formula for happiness.

Happiness = smiles minus frowns. He said he maximizes it by not looking back on his mistakes and lamenting them. He learns and moves forward. He likes to continuously be happy.

And who wouldn’t be happy in Woz world?