Back in 2006 Dunkin’ Donuts started using the tagline “America Runs on Dunkin”. We decided to see just how applicable the tagline is to the state of Massachusetts, particularly during peak Pumpkin Spice season when Starbucks would theoretically provide the biggest challenge to that notion. We use anonymized user location data and dissected foot traffic patterns for this analysis. Before we dive into the answer though, let’s take a moment to talk about how we derived this information and what other insights the data reveals.

Skyhook maintains a rigorously curated database of POI venues in the US, categorized by the universally used taxonomies of Interactive Advertising Bureau (IAB) and Google AdWords. Additionally, Skyhook processes millions of mobile location signals daily -- offering the most accurate and actionable portfolio of location-based behaviors in the industry. By marrying Skyhook’s expertise in these two categories we are able to run analytical comparisons between user populations.

None of this analysis would be possible without our venue database which is a core component of our Personas and Context products, fueling key features such as customer behaviors and Infinite Geofences. We place a high value on high quality venue data because it ripples throughout our product. Before entering any venue into our production data set, we perform thorough data quality testing, which we developed when building our global first-party location network.

That being said, we chose to examine the foot traffic patterns of Dunkin’ Donuts and Starbucks customers within the state of Massachusetts for this analysis. There are approximately 239 Starbucks and 1,116 Dunkin’ Donuts venues respectively across the state. We conducted a foot traffic analysis on Sunday, October 15th and Monday, October 16th to see if Pumpkin Spice season increased foot traffic during that time period and to find out which chain is truly the favorite in Massachusetts. We found the results to be telling.

Who Are These Customers?

When examining top performing Auto Behaviors of both customer bases, Dunkin’ beat out Starbucks repeatedly. These Auto Behaviors include: being used auto shoppers, owning a car, being Exxon Mobile shoppers and being general auto shoppers. Not so incidentally, we saw that the busiest Dunkin’ Donuts locations are all on or near highways and interstates in more suburban parts of Massachusetts. This can elude to the fact that Dunkin’ customers tend to commute and/or drive more than Starbucks ones. 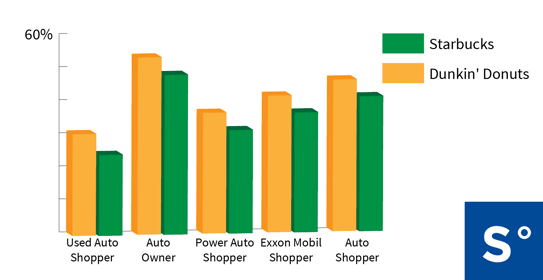 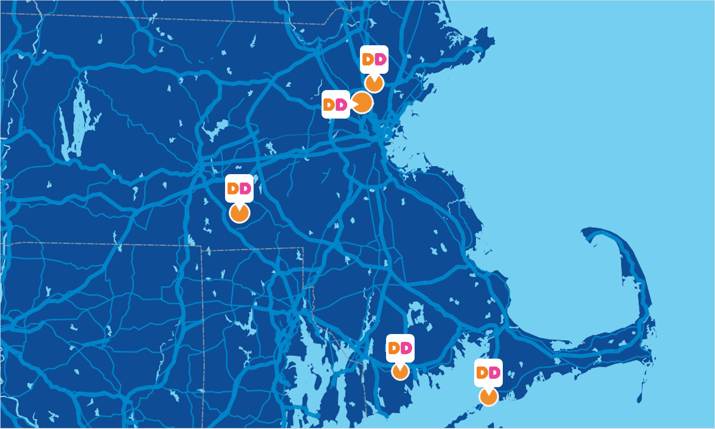 The busiest Dunkin' locations are located on or near highways

Using specialized homing algorithms, Skyhook is able to determine which neighborhoods the devices belong to, and by pulling census data we’re also able to understand the demographics of those neighborhoods. Dunkin’ and Starbucks customers diverge the most across the following five demographic sets: being college educated, graduate degree holders, individuals with high incomes, individuals without children and young adults. Starbucks customers fit all five categories at a much higher percentage than Dunkin’ ones do. When visualizing the foot traffic of Starbucks’ locations, we can quickly see that the busiest locations are all, unsurprisingly, on or very near college campuses. 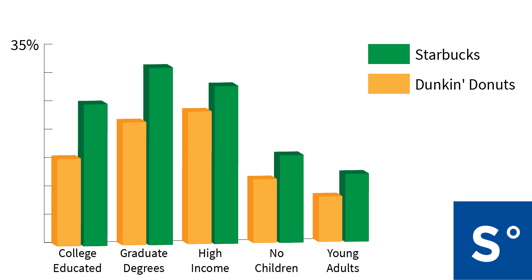 When examining shopping patterns of Dunkin’ and Starbucks customers we found that Dunkin’ customers prefer top US 100 retailers such as Walmart and Dollar Tree, which are both considered to be budget-friendly retailers. Knowing that Starbucks customers are often college students as previously mentioned, we found that they are often making their own purchasing decisions for the first time, and therefore have a tendency to experiment with varying newer brands. 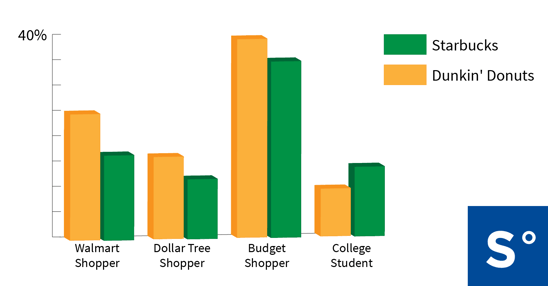 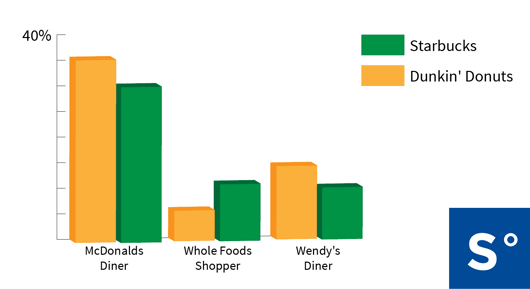 Overall, Starbucks customers are the more classic representation of millennials - young adults, college students and college grads who are more centralized in denser urbanized areas and more willing to spend money. Meanwhile, Dunkin’ customers are more budget-minded and auto owners who are dispersed across the suburban areas of Massachusetts.